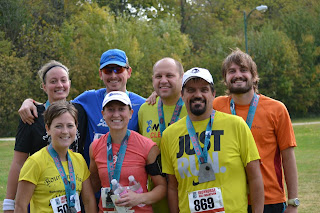 When I returned from Disney on October 13th I could not believe I had a half marathon the next day! I had been running great in September but being at Disney World was exhausting. We walked ALL day for 4 days and traveled for three days. I did run some while I was there but not enough to keep me in shape for a fast half marathon. So I ran with my friend David, in the "Just Run" shirt, to help to a PR. He really wanted a sub 2 but we were happy with a 2:04 since there were a lot of hills. Great race and I would like to add it to my calendar every year. 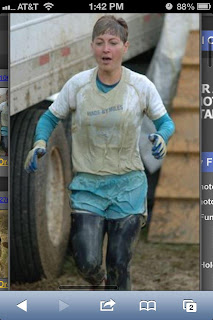 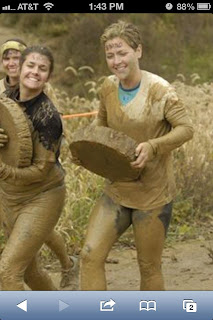 Since I have a marathon coming up soon I should probably spend my weekends doing long runs but I went to play in the mud instead! I did the Tough Mudder in Kentucky on October 20th and it was BRUTAL! It was in an ATV park so the terrain was basically mud covered mountains for over 12 miles. Then on top of that it was low 50s and we were freezing. One of the first obstacles in the ice water in the dumpster so you were wet the whole time. By mile 8 my lips were blue and I had no feeling or control of my body. So I pretty much walked the last 4 miles with a Mylar blanket just wanting it to be over with. However, I WILL do another one and I am planning on going to Tennessee on May 25th do it again. Hoping it will be plenty warmer then and I can attempt the obstacles I went around. 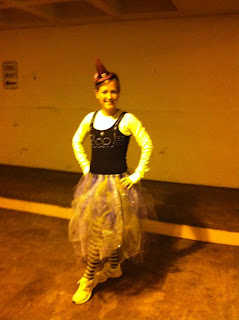 We did the Black Cat Chase in Frankfort, KY on October 26th. It is a huge race at night and it  a lot of fun. This year I decided to wear a costume and went with a sparkly witch idea. I have not enjoyed a 5K since August of 2011 so I was not sure what would happen. But I decided to go all out and see what I was capable of. Bad news... I forgot my watch : ( Finished fast and strong and had to wait until the next day to see my results. I ran a pretty fast race with a time of 23:23 which is only 28 seconds slower than my current PR. With a watch I think I might have made my PR but who knows. I might have freaked out when I saw some of my paces. I know I was flying down the big hill.

Now it is time to bust out a 20 miler, get in a bunch of runs this week, taper, run a marathon, bust out another 20 miler, taper and run another marathon : ) Looking forward to ending the year strong and hitting my goal of 1,500 miles!!!

Wife. Mommy. Teacher. Who loves to run and always tackling the next thing! I was a non-runner until post baby when I couldn't get my old figure back. So...
I Ran/walked my first 5K in May 2009. Spent the summer of 2009 running 5Ks. Tackled 2 half marathons in Spring of 2010. Tackled more 5Ks summer of 2010. I ran my first full marathon in October of 2011 and quickly became addicted. I am now on my way to becoming a 50 stater and hope to accomplish my goal by the age of 50 : )

Twila
I am a marathon runner who is hoping to run a marathon in all 50 states! Please follow along as I take on as many marathons as my budget, family and body will let me. If you are a 50 stater I would love advice/information on what races are good ones. Thanks for stopping by!