Run the Bluegrass in Lexington has announced how they will be helping raise money for Sarah Hart the runner that was murdered recently.  Run The Bluegrass is joining together to show love and support for the Hart Family.

First, if you are running the Bluegrass 10,000 on July 4th there is going to be an special recognition of the Hart family at 10:00 during the awards ceremony. So after you run the 10K please stick around and show your love for the family.

Second, there is going to be a race on August, 11th for Sarah Hart called Run with all your Hart. I know for many of you there may be a race on that day you are already registered for but please consider making a donation or changing your race plans to support Run with all your Hart. It is the week before Dash for Life for the local runners so I hope you can all make it! We can car pool to Russell Springs together!

Also Run the Bluegrass is matching donations made to the Sarah Hart Foundation. Together we can show others that these acts will not go unnoticed and we will fight back with love, sympathy and compassion for others.  Runners stick together!
Posted by Twila at 6:04 PM No comments:

Well if there was every a week to make you motivated to eat better and hit the gym harder it has been this week. We have the Olympic Trials and Magic Mike! It is like 6 pack city every where you look! 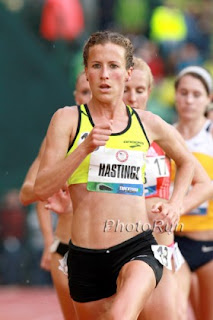 You have the amazing Amy Hastings along with other amazing women runners who are rocking some toned and flat bellies! 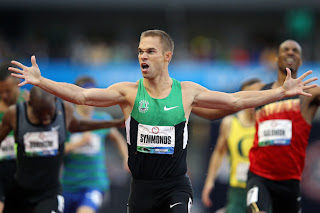 I seriously need to watch Men's Running a little more often. Nice to meet you Mr. Symmonds! Unfortunately I think there is a rule that they have to wear shirts when they run : ( But I am 99% sure there are some awesome ABS going on under there. 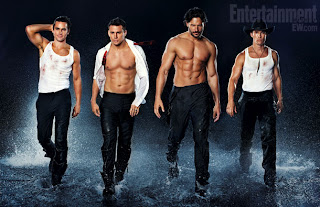 Then you have Magic Mike hitting the big screen on Friday! Yep I am planning on being there. Okay obviously I don't want their abs but I bet the weren't eating cupcakes and chocolate when they ended up with those abs. 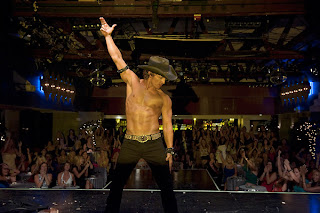 "Looks like there are some lawbreakers up in here"

Just my motivation for the week : ) Shallow yes.. but at least I am working hard!
Posted by Twila at 2:50 PM No comments:

Anyone else find themselves leaving behind notes like this. The where to find my body notes :) This is what I left this a.m. in case I did not return. 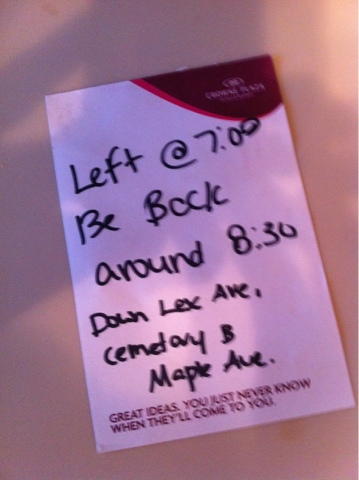 I love the Nike Pegasus! I was first put in a pair in October and feel love with them very quickly : ) 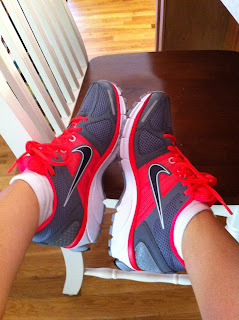 I wore them for the Bourbon Chase and West Virginia Marathon. They started to feel a little broken down around 350 miles and there was a new awesome color out for the Spring in February so I went ahead and bought a new pair to get me to and thru my Spring marathons.

They looked liked this... 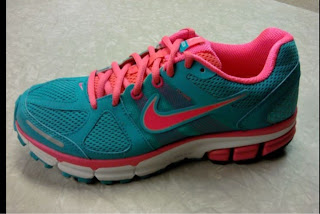 I LOVED the way those shoes looked at have been in them since early February. I trained for both of my Spring marathons in them, attempted to run Atlanta and ran Derby in them. When the summer started I new the miles were high on them but kept on running in them because I knew the 29s were coming out soon. This past weekend I realized those shoes were DONE and I was going to have to do something about new shoes. I was heartbroken when I read online that the 29s were not coming out until July 8th : (

Well when were in Dick's shopping for Scott a Father's Day gift I spied the gray/blue 29s! WHAT?!? I quickly called over to John's Run Walk Shop and found out they had one pair of the new blue ones in my size. We rushed over and they were MINE! This picture does not do the blue justice. They are SO pretty : ) Which is what matters the most; right?? 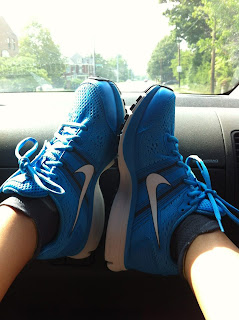 I took them out for a short run Sunday morning and they feel awesome. I am a neutral runner so the Pegasus is a great shoe for me. You should NOT choose a shoe because of the brand, because of how it looks or because your friend told you to get the shoe. I was put in the Pegasus at a local running store after we had a lengthy conversation about my running needs and I tried on many running shoes. If you are a new runner looking for the right shoe PLEASE go to a real running store and talk to someone who actually runs. You should take your old running shoe with you and make sure you tell them about any aches and pains you may be having. It is very important that you get in the right running shoe. Since I have been in the Pegasus I have had little to no problems with my feet, knees or hips. I get the usual aches and pains but nothing serious. It is NOT because I am wearing the Pegasus. It is because I am in the RIGHT SHOE FOR ME!
Posted by Twila at 8:00 AM 2 comments: 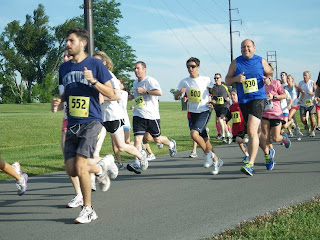 Start of the race; that is me right behind Jeremy my usual running partner. I tried to keep up with him but it was NOT happening. He finished a good 20 seconds ahead of me. 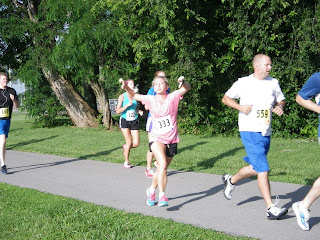 This shows my true feeling about 5Ks; take off at a lovely 7:25 pace and end up with a killer side cramp. Then guess what you get to keep that up for 3 awesome miles. How about we slow down about a minute a half and see who is left in 25 miles : ) I will take my marathon any day of the week. 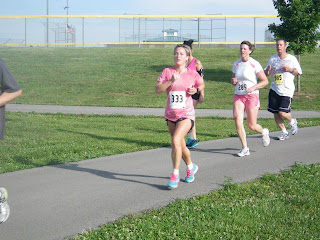 See I am still not happy! I actually almost puked while blowing a snot rocket in about 20 more feet. Glad Crystal didn't get that moment. 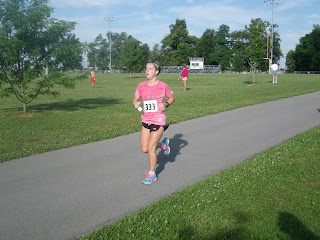 Coming in for a finish. I actually thought I was going to PR because I couldn't read the time clock. I am hoping to PR at some point this summer. I have a race per month thru September so that gives me 3 more attempts but the race in September is NOT a PR course due to lots of turns and being in late afternoon. So I am hoping it will happen in August at the Dash for Life 5K.

She was a Runner and a Mother Runner : (

Yesterday there was a horrible incident in a small town close to my hometown in Kentucky. Being a woman runner and a mother this situation has been horrible to read about.  A young woman was running with her sister and quit her run early to go back to the car. Her sister looked for her after she had completed her run and she was missing. She was later found in weeds along a highway. She was a mom of three and the autopsy revealed that she was 10-12 weeks pregnant. The man has been caught and he stated he attacked her for money. I am not sure about you but I do not run with money or any items of value other than my Garmin. Here is a link to the story at Lex18.com.

I am so thankful to have so many running friends that I hardly run alone. However, this will make me think twice about any run that I do outside. I live in a fairly nice neighborhood in a small town but perhaps I am not safe there. Remember to be aware of your surroundings, let others know you are running, run with a phone and know the area you are running in.
Posted by Twila at 5:00 PM No comments:

Yes I ran a 5K! The first one since last August! I was thrilled let me tell you. I LOATHE 5Ks... I mean you have to TRY the WHOLE time : ) My friend has a great picture of me from the race that I will post when she gets it to me. Lets just say I gave the first half mile 2 giant thumbs DOWN!

Mile 2 was the usual misery at the park with a lot of up hill and me hating life. Last mile I was seriously breathing like I was dying, grunting out loud and even said "Shit" a couple times as I was making the last few turns. I had no idea who was in my age group and was certain all the women that were in front of me were my age so I was just trying to finish!

Glanced at the clock and was like 22:XX! OMG I would PR at my first race of the season. 22:40!!! 15 second PR...... oh wait that is 23:40 : ) Guess I should wear my contacts when I run. Either way it is my 3rd faster 5K time and puts me right where I started last summer so a PR is a possibility in August when I race on the faster course around here.

I did get 2nd in my age group which was a nice plus and the girl that got 1st was like 15 seconds in front of me. She looked way older than me so I didn't even try to pass her : )

FYI: I am not pregnant or that much fatter! That is my SPI belt since my iPod shuffle is MIA. I think I left in a treadmill when I threw down during speed work at the gym. Maybe that will teach me to control my temper while running.

Wife. Mommy. Teacher. Who loves to run and always tackling the next thing! I was a non-runner until post baby when I couldn't get my old figure back. So...
I Ran/walked my first 5K in May 2009. Spent the summer of 2009 running 5Ks. Tackled 2 half marathons in Spring of 2010. Tackled more 5Ks summer of 2010. I ran my first full marathon in October of 2011 and quickly became addicted. I am now on my way to becoming a 50 stater and hope to accomplish my goal by the age of 50 : )

Twila
I am a marathon runner who is hoping to run a marathon in all 50 states! Please follow along as I take on as many marathons as my budget, family and body will let me. If you are a 50 stater I would love advice/information on what races are good ones. Thanks for stopping by!